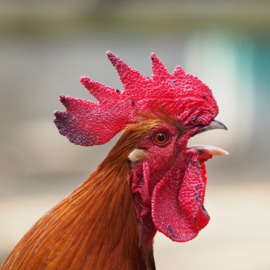 Posted by Calum on 18th July, 2020
"Gog-a-ghuidhe-ghaoidhe!" As the cockerel dispels the day before him, welcoming the day, I would like to welcome you back to the second part of this blog! We are continuing with folklore of the cockerel with idioms within our corpus and other books.

In the book "The Gaelic Otherworld" by John Gregorson Caimbeul there is an account praising the cockerel: “Is e sin coileach-tighe, dubh ’san dath, agus a thugadh a mach am mìos a’ Mhàirt. Cha ’n ’eil coileach eile a ghlaodhas cho fìor. Goiridh e anns a’ mhionaid a thionndaidheas an oidhche gu là,” ["It's the house-cockerel, black in its hue, that takes the month of March out. There is no other cockerel that crows so true. He will call the minute the night turns to day"] and "Coileach dubh a’ Mhàirt, Coileach is fìre ’tha” ["The black cockerel of March, the finest cockerel there is."] There is a story that a mother was stolen by the fairies and her husband left to find her. He heard that she could be found in a hillock, that was a fairy-fort, and he went inside with a "coileach dubh màirt" ["black March cockerel"] and a piece of "cruaidh" (steel). Around the time of morning the cockerel started to crow a search started looking for him. When he was discovered, with steel and a cockerel, he had permission to return with his wife with his wife.

In some areas, in order to heal epilepsy, a live cockerel would be placed in the earth and buried! This is recorded in “Life in the Highlands and Island of Scotland” by Colin MacDonald.

The cockerel is very important in the the Gaels' word as well in many different ways, for example one says that the ocean is “a’ gabhail coilich” with a bubbling and glogach appearance on the surface of the waves, with its "cìrean" ["combs"] seen on top of them. “Coileach an t-sruth” ["Cockerel of the stream] in Father Allan MacDonald's book, “Gaelic Words and Expressions from South Uist and Eriskay” meaning an eddy in a stream.

“Coileach an teas” is said for "na dìobardan" and "na luinn" ["the blades"] for the simmering waves of air in hot weather, with visible combs bounding in the air.

One could say "Tha a h-uile coileach làidir air a dhùnan fhèin" in the same way one could say "Tha an cù dubh air ’òtrach fhèin" ["The black dog is own his own midden,"] but it is more similar to the proverb I read in Scots English; "The Cock is crouse o' his ain midden!"

If "Cuir coileach air do ghuth" is shouted to you then you should speak up!

"Coilleach dubh" is used as an idiom to mean that there isn't a trace of someone left anymore for it has been dispelled by the black cockerel. One could could use in the sense that something is worn out or spent as well.

"Coileach gaoithe" is used at the top of the house to see the direction of the wind but "Coileach-gaoitheadh" does not mean the same thing, the word means "madadh-greine,” “suidheag" or “a’ ghrian ’na trì” (“a Sundog”).

An Islay fisherman said "Tha na h-amsain dol don mhonadh agus na coilich dhubha dol don chuan" when he saw farmers having bought a boat going to the ocean. The idiom is said when someone incapable and inept is involved in an action or effort in which they are not accustomed and it is unlikely that they will succeed.

In the area of Munterlooney, in County Fermanagh, in Irish Gaelic, there is the saying "Is olc an coileach nach fiú a bhrot ól" meaning that one should carry themselves properly because the day will come when when they will rue the day and they will have to deal with the consequences.

There is an abundance to write about about the cockerel and it is difficult to write everything about it in this blog but there will be an oppourtunity for you to write to us what your know! Do you have a story or information abou words and phrases connected to the cockerel? Do you know any of the words above? Let us know on facebook, twitter and our website!
< Previous
Next >
Your comment has been submitted for moderation