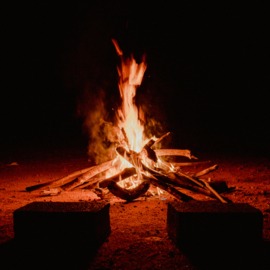 Posted by Calum on 31st October, 2019
It’s Halloween night tonight and we’re very excited at the office! We decided that it would be great to write a blog about it with the words we have in “Fieldwork” that are connected with practises and folklore of Halloween.

There is a saying “O Bhealtainn gu Samhainn” [May-day to Hallow-tide] which records the time of the summer to the autumn, almost.

We have Oidhche nan Cleas, this is explained with all the tricks and larking about that people would get involved with at the time: we have gathan gainnisg where marram grass is used as a torch through the night. Interestingly we have gathan-ganaisg and, apparently, that boys would put a piece of gathan-ganaisg under women’s skirts, where they could! This “trick” would bring fertility, apparently. We have gathan gannaisg as well and there’s a story that young boys would chuck an armful of them at each other, yelling “Mo shaighead air do shaighead-sa!” [My arrow on your arrow]. This feat would keep the fairies away from doing harm during the year. A golan gaoithe would be made, a potato decorated with swan feathers. (We aren’t sure, for certain, how this is connected to other Halloween tricks, but if you know, let us know!) There’s another trick which is interesting in it’s own way, Pollag na Samhna, where one would dig a hole in the ground to find, or prove, their fortunne and luck. The next day if a worm or beastie would appear in the hole then the year would be lucky and fortunate to you, but if the hole was empty then the year wouldn’t be a lucky or fortunate one.

A samhnag would be created, a bonfire, and you would have a shindig with a crannag, a ceilidh (or party) for Oidhche nan Cleas. With an fair like this there would be food an a feast for certain involved, where there would be a Bò Shamhna, or caora chàraidh, around Halloween time, where the cow or sheep would be given to the Clan chief or proprieter. Children would be given a fuarag, a pudding of oatmeal and cream. This would be the last sweet of the year, almost, because there wouldn’t be any more cream until the next year. This is very similar to “Trick-or-Treat”, don’t you think? While I’m mentioning “Trick-or-Treat” some people of the town would go about with a aghachoimheach, (aghaidh-choimheach), a mask and costume as well. It is interesting that most of the tricks we have today are so close to the practises we have from long ago and of recent in Scotland.

Do you know any of the tricks and feats or practises above here? Do you have any versions of the ones we have here? Let us know on facebook, twitter and our own website!

Welcome to our blog!

“We never know the wealth of water 'till the well is dry” by Thomas Miller, is a very truthful proverb to us all.

As some of you may know already was Là Màrtainn Builg [St.