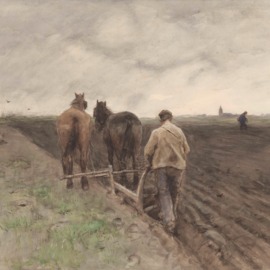 Posted by Calum on 28th April, 2022
Continuing with the same topic from a fortnight ago, looking at superstitions, especially some that are connected with days of the week.
Some of the days are better for doing something or for specific actions: In the book “The Gaelic Otherworld”, by the Reverend John Gregorson Campbell, there is more information on what was, and will be, lucky or unlucky to do on specific days:

Monday – It was unlucky starting on ploughing on this day. There is a phrase showing this to us:
“Tionnsgnadh nìthear Diluain,
Bidh e luath no bidh e mall”.
Bhiodh e sealbhach ri imrich air an là seo:
“Imrich an t-Sathairne mu thuath,
Imrich an Luain mu dheas –
Ged nach biodh agam ach an t-uan,
’S ann Diluain a dh’fhalbhainn leis.”
[“Work commenced on Monday, Will be (too) quick or will be (too) slow.”]
It is said that Monday was “Iuchair na seachdaine” [“Key of the week”].

Tuesday – It is lucky to start ploughing on this day, and it would be lucky if the equipment broken because the work for the day would cease!

Wednesday – It would be unlucky to comb hair on this day apparently. There is a phrase connected to this superstition:
“Galar na tè a chuir a’ chiad chìr Chiadna na ceann.”
[“The disease of the woman be upon you who [put the first Wednesday comb in her head.”]
The lady who combed her hair Wednesday, according to the book, but I don’t believe this to be the case at all, it’s best to keep clean!
In Spring seeding would not start until this day. It would be lucky to plant on this day.

Thursday – It is lucky if a lamb or calf is born on this day:
“Diardaoin latha Chaluim Chille –
Latha chur chaorach air seilbh
A dheilbh, ’s a chur bò air laogh.”
[“Thursday, the day of benign Colum-Cille - A day to take possession of sheep, To put cloth in warp, and settle cow on calf.”]
It is lucky to cut your hair on this day as well:
“T’ fhalt ’s t’ fhionna Diardaoin,
’S t’ ionga mhaol Disathairne.”
[“Cut your hair and beard on Thursday, And blunt the nail on Saturday.”]
It is unlucky if Beltane falls on this day although:
“Is iomadh tè bhios gun mhacan baoth
Nuair is ann air Diardaoin bhios a’ Bhealltainn.”
[“Many a woman will be without an infant son, When Beltane falls on Thursday.”]

Friday – There are many superstitions connected to Friday: It is unlucky to visit someone who is ill on a Friday or Saturday; Ploughing would not happen on Good Friday, but there are accounts that people would shun using iron on Friday; Jesus was crucified on Friday, therefor it is said that the powers of evil would be stronger on a Friday, therefore “Friday would be against the Week” [“Dihaoine an aghaidh na seachdaine”]; Boats would not go to sea on this day at all; It would be lucky to cut a nail or hair on Friday, or to sharpen knives, to count animals, or to go close to a fire; It would be unlucky to leave work to Friday, similar to Monday with starting work. You swear to someone saying “Ruithe na h-Aoine ort” [“The Run of Friday on you”] for that very reason; It would be unlucky to kill a lamb, calf or another animal – some are so superstitious that they wouldn’t move their livestick at all on Friday.
In terms of children being born on a Friday “Bidh neach a rugadh Dihaoine dripeil” [“A person born on a Friday will be busy”] would be said, (this is connected to a superstition where it is unlucky to leave work still to do to to Friday, therefore they would be in a rush in order to finish the work before the weekend).
“’S i ’n Aoine bhagarrach nì ’n Sathairne deurach” [“A threatening Friday makes a tearful Saturday”].

Disathairne – No-one should start or do any cloth-work on Saturday:
“An rud 'thèid a dheilbh Disathairne,
Bidh stad nan seachd Sathairne air”.
[“The warp prepared on Saturday will have the delay of the seven Saturdays upon it”.]
If there is a new moon on a Saturday stormy weather will follow afterwards:
“Solas Sathairne gabhaidh e na seachd cuthaich mun tèid e 'mach”
[“Saturday light goes seven times mad before it goes out”].
“Deireadh nan seachd Sathairne ort” [“The end of the seven Saturdays be upon you”] is a bad curse is said and “Thig nas miosa na sin ort, thig galar nan seachd Sathairne ort” [“Worse than that will come upon you, the disease of the seven Saturdays will come upon you”] is said as well. But, despite all the bad accounts about Saturday, Saturday is not at all bad for the worker; the starting day of the weekend:
“Och is och Diluain,
Ach 's e mo luaidh Disathairne”!
[“Alas and alas is Monday, But my love is Saturday”]!

Didòmhnaich – There are things we could write about Sunday superstitions, but if you would harvest a plant on this day it is said to be neither bad or too good:
“Luibh an Dòmhnach gun mhath gun chron”!
[“The Sunday plant without greatness, without harm”!]