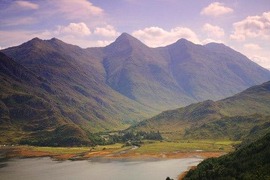 The phrases “Cho fada sa cheann ’s a bha Fionn na chasan” (“As long in his head as Fionn was in his legs”) said to some one that is either clever or stubborn, agus “Thuit trì le Bran air a h-aon” (“Bran fell three in the stead of one”) for Bran’s, Fionn’s dog, adeptness because he was the best dog the Fingalians ever had.

The proverbs here are connected to the Fingalians, Fenians and the Clans of Scotland (the Children of the Fèinne): We shall continue next month with more proverbs. Do you recognise any of the proverbs above? Let us know on facebook, twitter and our own website!
< Previous
Next >
Your comment has been submitted for moderation

Continuing with the same topic from a fortnight ago, looking at superstitions, especially some that are connected with days of the week.

There are two proverbs in Scottish Gaelic and Manx Gaelic: “Thoir gèill do ghis, Is gèillidh thu do ghis” [“Forsake a superstition, and you shall be forsaken to superstition”], and “Mannagh vow cliaghtey cliaghtey, nee cliaghtey coe” [“If a practice is not practised, practise will lament”].