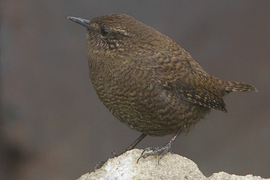 Posted by Calum on 16th May 2019
There is a tune written about the wren, “Bàs an Dreathan-duinn” (The Wren’s Death) for the pipes. I believe that it is connected to Latha an Dreathan-duinn (Lá an Dreoilín in Irish) on the Isle of Mann, where the people of the island hunt the wren on Saint Stephen’s Day (26th of December), Laa’l Steaoin in Manx. In the story, that happened a long time ago, the Queen of the Fairies, Tehi Tegi, was going about on the island and an enchantment was cast upon her that would make every male of the island fall in love with her, following her with intent to marry her. With this the crofts and the crops started to go to ruin and this displeased with the women of the island at all! As it happened the men followed Tehi Tegi until she lead them to the sea where they unfortunately perished. After this the women and the others that were left put before them to catch her and put her to death. They ran and hunted after her but Tehi Tegi fled in the form of the wren. Although she fled safely from the island people she was banished from the Isle of Mann forever but she is allowed to return to the island in the form of the wren one day a year: this happens on Saint Stephen’s day. This is a piece of the song “Hely yn Dreain” (The Hunt of the Wren) from the collection book “Manx Ballads and Music” by A. W. Moore:

“Yn dreain, yn dreain, ree eeanllee ooilley,
Ta shin er tayrtyn, Laa’l Steoain, ’sy connee;
Ga te’h beg, ta e cleinney ymmoddee,
Ta mee guee oo, ven vie, chur bine dooin dy iu”
[“The wren, the wren, king of all the birds,
We have caught, Stephen’s Feast-day, in the furze;
Although he is little, his family’s great,
I pray you, good dame, do give us a drink.”
(The melody, and other melodies of other similar songs of the wren are in this video.)

I have an interesting book “Irish Proverbs in irish and English” by Gabriel Rosenstock and it records a proverb or two about the wren. I say “Is leor don dreoilín a nead” (The Wren’s nest is enough for him) when discussing wee tiny flats in Glasgow. The proverb ““Sin méadú ort! Arsa as dreoilín nuair a rinne sé a mhún san fharraige” (That’s an amount for you! Said the wren when it peed in the sea) is recorded where one would say this to someone trying to help but they didn’t do any help at all. One would say this to somebody a’ sleachdaireachd (slacking) in the team.

I hope you found this sort of blog interesting. Let us know if you know anything else about the wren on Facebook or Twitter.

There are many sorts of special birds in Gaelic Folklore, for example the wren (King of the Birds), the eagle, the owl, the cuckoo, the robin and so on but there isn’t a bird as special as the cockerel.

I have been reading “Irish Superstitions”, by Dáithí Ó Hógáin, about superstitions of the Gaels and they are all very interesting, looking at the insight...

I would like to say “Happy May-Day” (or Beltane) to you all!