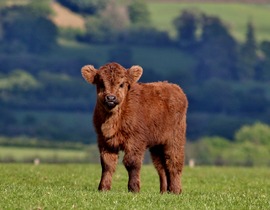 Posted by Calum on 11th October, 2018
I have recently read about crofting practices during calving time where one would put the sheared skin of a dead calf on a calf that did not have a mother to encourage the mother of the dead calf to produce milk. The word was called a “laoighcionn”, or “laoichgeann” in North Uist. The word laoighcionn appears in the Transactions of the Gaelic Society of Inverness, vol. XX, with the meaning: “calf skin, a tulchan.” “Tulchan” comes from “tulachan” and means a calf’s skin stuffed with straw and hay given to the mother of the dead calf in order to yield milk from her.

There’s also another interesting anecdote about the word “tulchan.” It is said that there was a connection with the word and history of the church of Scotland in terms of Episcopalianism in the church. When there were Bishops in the church of Scotland it was written that the Arch-Bishop was “clothed” in animal skin to filful an arbritary role where there would be no need for him to debate about what type of hierarchy the church had at that particular time. One could argue with the radiacal Prebyterians that there was a connection with the Bishops and the wolf in sheep-skin amongst the flocks of the church but this isn’t entirely clear and it’s quite controversial. It is more likely that the Bishops were filling a job and duties.

To conclude, the word in its broadest sense means a person who earns a reward or money when they are letting on that they are another person so that they can be succesful when an opportunity arises to take advantage of any given situation.

Welcome back to part two of Gaelic Similies!

For every learner, and fluent-speaker of Gaelic likewise, we have an intriguement and interest in Gaelic similies.