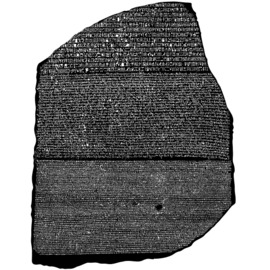 Posted by Calum on 27 September 2018
I would like write this blog on the comparisons and a recognise a selection of words that are shared between Gaelic and Scots. It is easy to consider the two languages as two opposing sides of the minority languages of Scotland but the both share a number of words. In a book written by R. L. Cassie he recognises the roots and origins of Gaelic and Scots words: The book gives examples of Anglo-Saxon/Old English; Gaelic; German; Irish; Old Norse/Old Norwegian, Old Danish, and Old Swedish as the most important with regard to word origins that are still recognisible in Gaelic and Scots today.

The word “hafa” is a good example of old Norse having an effect on the two languages: The word “àbhaist” (Gaelic for “custom, habit, norm”) and “havens/haivins” (Scots for “manners behaviour” according to Cassie) .“Hafa” itself means “to behave.”

The word “Baxter” means “baker” in English and is written as “Bacastair” in Gaelic. It derives from the word “bakstr” meaning “baking” or “making bread.” Many will be aware of the Scots word “braw” but not many will associate it with the word “brèagh” (handsome or beautiful), where it comes from the word “bra / braw” in old Norse.

Scots has had an effect upon other Gaelic words such as “shilpit” (meaning “weak” or “feeble”) in the research that Hugh Barron did in the Aird district, Invernesshire with the word "Siolpach". This is evident with words in Perthshire, such as “breas" (brace – mantelpiece), cuife (coof), stramb (stramp – to tramble),” and so on.

But Gaelic has had a clear influence on Scots with words such as bannock, ben, bog, bothy, caber, cairn, caman, capercaillie, ceilidh, clan, claymore, corrie, crag, gillie, glen, gob, kyle/kyles, laroch, quaich, and so on.

Therefore, there’s a strong bond between Gaelic and Scots with roots from Old Norse and Old English besides. Ergo, speaking as an “Aiberdonian/Don” the two languages are established as important languages in the history and culture of Scotland.