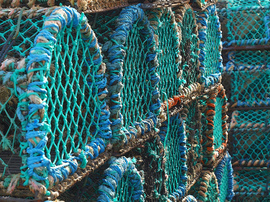 This week, we are looking at two Gaelic names for the month of February: Mios Crochadh nan cliabh and Mios Marbh.

According to the entry in the DASG Fieldwork archive, Mios Crochadh nan cliabh was used as little or no work was done in February due to the severity of the weather conditions. (Crochadh nan cliabh meaning hanging up the baskets/creels).

The phrase Mios Marbh is referred to in Carmina Gadelica by Alexander Carmichael (1900), which also mentions St Bride (St Bride’s Day occurs on the first of February):

These two phrases were both collected in Eochar, South Uist in 1987-88.

Do you know any other names for the month of February, or any other months? Let us know on Facebook or Twitter!