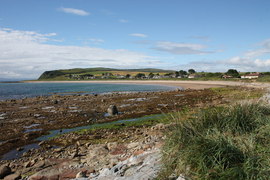 Posted by Calum on 29th July, 2020
“We never know the wealth of water 'till the well is dry” by Thomas Miller, is a very truthful proverb to us all. Is is clear to us the worth of the well today but imagine just how important it was in the years and centuries before. It was an important facility in the past but imagine where we would be without it. Therefore I decided to learn about the wells spread about in my ancestors' area in Easter Ross and we shall have a look at them today in this blog.

Many springs and wells were found and cultivated in the area with some of them possessing healing properties, lore or a respective history about them almost. I learned lots about them from the book “Place Names of Ross and Cromarty” le W. J. Watson, he wrote lots about the wells to be found in the Nigg district, at the end of the Machair.

“Tobar na Baintighearna” [“The Lady’s Well”] can be found in Hilton aig the Lady Mary’s Old Chapel. The people of the district called it “Our Ladyis Chapell.” There are two more wells at the coast close to “Lady’s well; ““Tobar a’ Bhaile Dhuibh” [“Well of the Black Town”] and “Tobar Suardalain” [“The Well of the little Swordale”]. This site was used for unbaptized children who passed away (or as a “Cruach na bPáiste,” as they would say in Ireland.)

“Tobar Chormaig” [“Cormack’s Well”]can be found at Shandwick Farm with “Tobar na Muice/Tobar nam Muc” [“Well of the pig/Well of the pigs”] and “Tobar a’ Chlaidheimh duibhe” to be found in Shandwick. This isn’t the full name of the well though, it is “Tobar a’ Chlaidheimh Duibhe an Èirinn, is i air aghaidh na greine an (am) Port an Druidh” [“Well of the Black Sword of Ireland, standing against the sun in the Port of the Druid.”] It is said that the water doesn’t rise but it shoots forth from the rock. “Port and Druidh” [“Port of the Druid”] is to the west of Shandwick. Nigg district is known for struggles and turmoil in her history, that must be the reason there is a healing well with “black sword” in it’s name!

“Sùil na Bà” [“Eye of the Cow”] and “Leisgeig” [“Little lazy-one”] can be found to the north of Easter Rarichies. It was custom for the people of the district to bring their cattle to drink from this well. “Leisgeig” can be found closer to the north to Broomtown, named because the spring doesn’t flow much, looking as though it’s “lazier” than other springs!

To the south of Rarichie there are three wells to be found: “Kenneth’s Hill Well,” “Glagaig” [“Little noisy-one”] and “Tobar na Slàinte” [“The Well of Health.”] “Tobar na Slàinte” is special in the area because of its health benefits, people used to go to this well for healing them and they would have had to take this walk without saying a word to anyone they would meet because the effects of the well wouldn’t work if you talked.

Close to the fort of Rarichie “Tobar na h-Iù” [“The Yew Tree Well”] can be found. In the folklore of the area it was a Danish Fort or a fairy-fort but it is a fort from the time of the Picts. According to Watson’s book the Picts used to say “Tiugamaid ’bhàn ’dhèanamh rotha riachagan,” [“Let’s go down to make rows of scratches [to sow seeds in],”] they used to live at Cadha an Ruigh’, closer to the slopes of Ben Nigg. The well had healing properties and it would be used for “White Swelling.” At the base of the fort the well could be found. There is a verse connected to this well:

[“Well of the Yew, Well of the Yew.
To thee it is that honour is due;
A bed in hell is prepared for him
Who cut the tree around thy ears.”]

A Yew Tree used to be close to this well, with its branches hanging above the well but it was chopped down some time a long time ago, I haven’t found a story to see if it was chopped down by someone, or what happend to the person after they chopped the tree down!

We will continue with more folklore about the wells of Easter Ross in the next blog. Do you have any knowledge of similar stories? Do you have any wells or springs close by you where you are? Let us know on facebook, twitter and our own website!
< Previous
Next >
Your comment has been submitted for moderation