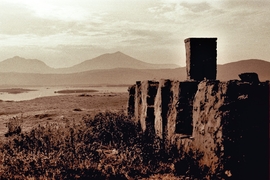 Work began on the DASG Audio Archive in 2015 with the aim of making all audio recordings held in Celtic and Gaelic in the School of Humanities at the University of Glasgow available freely online. DASG is the Digital Archive of Scottish Gaelic, an online repository of digitised texts, lexical resources and fieldwork recordings for Scottish Gaelic. The recordings held by Celtic and Gaelic came from a number of sources but most were made during the collection process for the Historical Dictionary of Scottish Gaelic project during the 1970s and 80s. These cassettes and reel-to-reel tapes were then digitised in 2011 and make up our Cluas ri Claisneachd archive.

The majority of the recordings were collected by AJ Smith in 1972 in Canada and Angus Martin between 1974 and 1978 from places such as Tarbert, Loch Fyne, Gigha and Islay. The collection also holds cassettes made by CIN MacLeod, Sister Beaton, DM MacQuarie, Duncan MacLaren, Tony Dillworth and Nancy Dorian. Some of the tapes remain anonymous and so our hope is that the public will help us identify these once they are made available online. Cluas ri Claisneachd contains 140 hours worth of audio files, with 10 hours being made available at present.

Our audio files will be published freely online with a full, downloadable transcription, a detailed contents menu and subtitles. They contain a mixture of English, Gaelic and Scots and a wide variety of dialects and accents. This amount of work takes some time to complete and so, only 8 of our 147 audio files are being published at the time of the launch. Then the hard work will continue to transcribe, archive and upload the rest of the files. Efforts have been made to keep the website as easy to use as possible and any feedback would be appreciated as the archive grows and develops.

In addition to publishing the audio recordings that are already held in Celtic and Gaelic, the aim of the archive is also to publish and make freely available other collections which may not have had a platform to be heard by the public. We were delighted when Tracy Chipman contacted us and asked if we would publish her recordings, which she made during her work on The Hebridean Folklore Project. These files make up the Mòthan Archive and will be transcribed in due course, but for now, we have made them all available online un-transcribed as Tracy did not wish for them to be kept from the public any longer.

This collection of recordings was a fieldwork project that began as The Hebridean Folklore Project and was founded in 1996 in Eugene Oregon, U.S. by Tracy Chipman. Thanks to the support of dozens of good folks who believed in its mission as a cultural organization “to help keep Scots Gaelic folklore alive and accessible” both in America and Scotland.  The Project focused on connecting with the tradition bearers from Scotland’s Outer Hebridean islands. A ‘Mòthan’ is the Gaelic word for a common butterwort, and was the name of a newsletter Tracy circulated about the contents of these recordings previously.

Field research began in 1996 and continued until 2004. During those years, Tracy travelled to the Outer Hebrides from the U.S. for varying lengths of time usually three to five months. In all season and all weather, she walked, hitched, ferried and bussed over the land, arriving to a warm fire to visit with good folk, elders and tradition bearers. They enjoyed hours of conversation about their homeland, their lives growing up on these islands, Gaelic language and the stories that swam both thick and tenuous through the years and generations.

On Barra, South Uist, Benbecula and North Uist, Harris and on Scalpay she was welcomed. Cups and cups of scalding hot, strong tea, homebaking (she put on at least a stone!) and sometimes she sipped a wee nip of the water of life, uisge-beatha. Sometimes, when the time was right, she recorded their stories, poems and songs in Gaelic, and if they were willing, in English as well. At the time Tracy was learning Gaelic and could actually understand much more than she thought. Sometimes a young person would join her in her visit. Sometimes Tracy told a story that she had heard in Barra to someone in North Uist. And so it went.

By 2004 thirty-four people had taken the time to sit with Tracy, offering a story to this Project. Some stories are personal narratives from their own family history, like the story of an extraordinary collie named Fly told by Hugh Matheson of Baleshare. Some are centuries old folklore, like the story of the Beasties Causeway told by Donnie MacRury of Carnish. Many of these story carriers and tellers have since passed on, and many of these stories have only lived in the telling, meaning they have not been written down.

The heartiest of thanks to so many from Oregon, Washington, Wisconsin, Iowa, Scotland and beyond. Also big thanks to master sound engineer, Tim Britton for his hard work and support in the digitisation.

Tracy is particularly delighted to be able to send these recordings back Scotland and the DASG archive and it is also her intention to find the living family members of those who gave stories for this project and make their recordings available to them at no cost.

All recordings are still owned by Tracy Chipman… but the stories themselves are as free as the wind to tell and share!


The Cluas ri Claisneachd and Mòthan audio archives will be launched on the 27th of August 2018 at a special event held at the University of Glasgow.

Welcome back to part two of Gaelic Similies!

For every learner, and fluent-speaker of Gaelic likewise, we have an intriguement and interest in Gaelic similies.