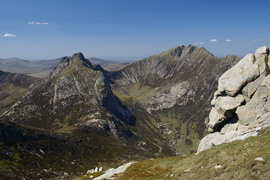 Posted by Kate on Thursday 12th January
This week, I took the opportunity to take a closer look at the dialect and folklore of a place that has forever attracted me. There was not a lot of awareness of Gaelic on the island of Arran when I was younger. It was very exciting to discover such a rich source of Gaelic heritage and language belonging there; in a place where I spent many holidays. Unfortunately, the last native speaker died in the early nineties. Therefore, it’s really only quite recently that the island has lost this direct link to their heritage.

For a wee taster of the Gaelic dialect of Arran, listen to this conversation clip, where an old man from Shiskine converses with the interviewer. You’ll hear quite a difference in pronunciation and vocabulary from other dialects that are more common in Scotland today.

In the following piece, you will hear surprising phrases from the interviewee John Robertson that I’ve never encountered before, the likes of ‘nios leòr,’ rather than ‘gu leòr’ for enough!

In our archive, you will also find righinneach, a word for hard and broken skin at the base of the nails, with a note of how to pronounce the end of the word in this area. The folk would say ciallan, for beard, instead of feusag; feumaire instead of feamainn, for seaweed; madag-dùn instead of biast-dubh, for otter. A thistle was called famail, not cluaran, as I know it. It really interested me to see the stark difference in vocabulary in Arran compared to mainland Argyll, even though the speakers were not that far away from one other.

I would thoroughly recommend visiting the corpus, in order to find out more about the gruagach in Bennan, on the south side of Arran. She dwelt in a cave and looked after cattle. The Arannaich would leave here a libation of milk, and in return, she protected their cattle from evil spirits. The custom of leaving milk out for the Gruagach mimicks a similar practice to glaistigs in other areas.

Saint Maol-Ìosa lived on Eilean Molaise, or Holy Isle, where there is now situated the Buddhist Sanctuary. You can hear a story about Maol-Ìosa on Tobar an Dualchais here.

I believe that it’s essential to keep in mind these dialects. I admire those that are trying to learn them and use them, even though they are not common today. This dialect reveals to us the deep and ancient roots that once existed between Arran and Ireland, and also with the rest of Scotland. It’s in this way that you may grow to know a place, and the wider culture of Scotland, in a way that simply would not be possible without it.