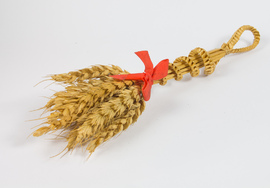 This week’s word, cailleach-bhuaineadh (‘the old woman of the harvest’) refers to a tradition that was once common throughout Scotland at harvest time. In the Fieldwork Archive, cailleach-bhuaineadh was recorded in Islay and refers to the last handful of corn at harvest time, which would be brought into the house, made into a St Andrew’s Cross, decorated with ribbons and then hung on a nail throughout the winter. In spring, the two horses got a half-share each of it before they began work with the plough.

One of the reasons why this was done was the ‘corn-spirit’ that was believed to be present in the corn. In Tìr an Eòrna – Land of Barley (an information booklet on harvesting traditions in Tiree, published by an Iodhlann, 2003), a thorough account is given on this. Here it is mentioned that the ‘corn-spirit’ was thought to give the corn strength and help it to grow vigorously. As the harvest proceeded, this spirit would become concentrated in the remaining crop, and the final sheaf to be cut would contain its essence. If this sheaf was saved throughout the winter, the corn-spirit would strengthen the corn in spring. Hence, a’ chailleach bhuan’ or maighdean bhuan’, as it was called in Tiree, was made out of it and fed to the horses at ploughing-time so that the corn-spirit would be transmitted into the soil.

As is mentioned by MacLean (Scottish Studies, vol. 8, 1964), traditions related to the last corn to be harvested were found all over Scotland in various forms and with various names. When hung on a nail inside the house as described above, the last sheaf would be called Cailleach Bhuana or Maighdean Bhuana. Sometimes the sheaf would be put on the top of the last stack of corn to signify that it was finished - then it would be called clàidheag. It also occurred that a crofter would throw his last sheaf of corn onto his neighbour’s plot of land to boast about having finished harvesting – then it was referred to as a’ Ghobhar Bhacach (‘the lame goat’).

If you have any additional knowledge on cailleach-bhuaineadh or other customs related to harvesting, please let us know below or on our Facebook or Twitter pages.

We are returning with more Gaelic songs of Glasgow.

Merry Christmas and Happy New Year to you!

The coldness of Winter is upon us again and we must keep warm throughout the Winter.